Fracking in Big Cypress National Preserve Could Have Been Avoided

The proposed expansion of oil drilling in Big Cypress could have been prevented.

On May, 29th 2002, President George W. Bush and his brother, then Florida Governor Jeb Bush, proposed the federal purchase of $235 million dollars worth of oil leases in Florida: nine oil leases in the Gulf of Mexico for $115 million and $120 million dollars to buyout mineral rights in Big Cypress National Preserve. Eight years before the 2010 Deepwater horizon spill in the Gulf, Jeb Bush described the purchase of mineral rights as needed to stop “oil drilling in two of the most environmentally-sensitive areas of the state.”

In 2005, Taxpayers for Common Sense decried government efforts to purchase Florida mineral rights as “one of the worst land deals in history.”

Today, environmentalists bemoan the failure to purchase mineral rights in Big Cypress as a terrible mistake.

Big Cypress National Preserve was created in 1974 to “ensure the preservation, conservation, and protection of the natural scenic, floral and faunal, and recreational values of the Big Cypress Watershed.” As a swamp, Big Cypress is critical to the watershed of the Everglades. Wetlands purify freshwater and absorb storm surge to prevent floods.

The ecology of Big Cypress is not, however, pristine. Oil production began in Big Cypress in the 1940s. The preserve is home to numerous threatened or endangered species (including about 30 to 35 Florida panthers) considered “indicator species” — indicating the ecosystem, here Big Cypress, is sick. 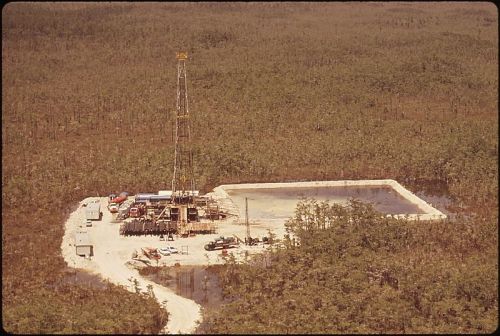 Public debate over further drilling in Big Cypress is contentious. Homeowners worry drilling may occur close to their homes. Environmental groups are concerned that the seismic study may lead to drilling that could contaminate the aquifer that most of Florida relies on for its drinking water.

The Natural Resources Defense Council, National Parks Conservation Association and Conservancy of Southwest Florida expressed concern that even studies exploring the possibility of increased oil drilling in Big Cypress will exacerbate ecological distress since the oil exploration will require use of large trucks and heavy machinery over a 110 square mile swath of pristine wetlands.

The controversy over increased oil drilling in Big Cypress is intensified by the fear that Burnett might use “acid fracking” (a process of pumping acid to stimulate well production).

Although state and federal government may limit the scope of oil drilling activities by permit to protect public health and the environment, the US Constitution protects mineral owners from taking without compensation. Hence, the only way to completely prevent further oil and gas development (with or without acid fracking) in Big Cypress is for the government to purchase the mineral rights.

Which takes me back to my opening statement.